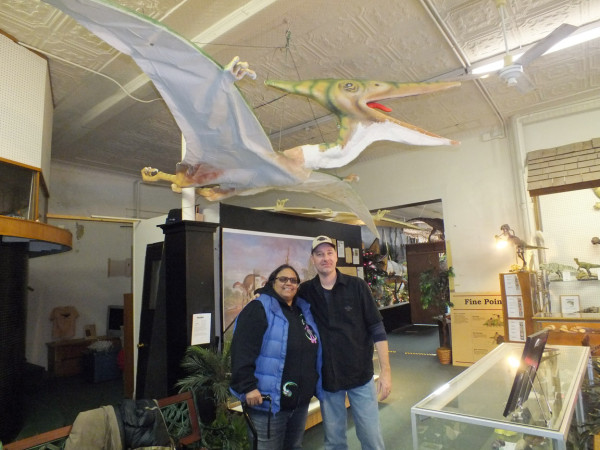 Carole and I got an early jump out of Bismarck. The next stop was planned; part of Plan A, actually, as I'd been aiming for this since we left Minneapolis. Namely, the Makoshika Dinosaur Museum in Glendive, MT. I spotted this Place of Interest on the AAA map, and it looked interesting, and on the way. I figured it would take a couple of hours to drive, at which point we could have lunch and go to the museum.

But first, we had to decide how far we'd get today. The weather was clear but cold. No snow, but 0° temps. Carole was still not up to snuff, and with the stop I figured the 550+ miles to Bozeman would be sufficient. We secured a hotel in Belgrade and set off.

While I had technically been to North Dakota before (staying overnight in Fargo while heading to the Winnipeg Folk Festival in 1983), the visit was short and I never felt The North Dakota Experience. This visit was longer, and while we only scratched the surface of what the state has to offer, I feel much better about waying "I've been to North Dakota" than I had.

And when we got to Montana, the first rest stop claimed a Visitors Center. Mostly (while we were there), unstaffed, with restrooms and maps. Again, it was very cold, so we didn't linger outside much. The sign proclaimed, "From this end of Montana to the west end is about the same distance as from New York to Chicago." which isn't quite true. The farthest distance in Montana, along the Canadian border, might be that long, but not the interstate route.

Arriving in Glendive, with the Museum's address in the GPS, we couldn't find it. We were initially fooled by the Glendive Dinosaur and Fossil Museum, which was closed for the season but visible from the highway. We continued on, and didn't see anything like a museum. Hmm. So we stopped at the Best Buy across the street from where it should have been to find that it was across the street. After a little business at the electronics store, we meandered over.

The Dinosaur Museum was created by Steve, the owner of the Hell Creek Music store at the behest of his then-12-year-old daughter. She went off to college (and I bought her music CD, made with her sister) and he moved the museum from its separate location to its present place attached to his store.
( more narrative and a few pics under cutCollapse )
To be continued: 20121223 Trip to Oregon and Back: Montana, Idaho, Washington and Oregon
Collapse