Continued from 20130105 Trip to Oregon and Back: Mt. Rushmore and Crazy Horse Memorial

We left the Crazy Horse Memorial after dark, letting the GPS direct us to I-90.

Within 36 hours, Carole had to be at work and I needed to get cracking on delayed projects. I had planned no more touristy things to do, just get home without stress and arrive early enough on Sunday to get a good night's sleep. The tactical plan here was to pick a hotel as far east as we felt comfortable driving to on Saturday night, to make the last leg as short as possible. We picked a place about three hours drive east, and took off.

Along the highway, well away from any city or building, we made a quick stop at a truck pull-over to change drivers. I looked up, and saw stars! Here in the middle of nowhere, the whole panoply of the universe was on display. Most of our journey was bitterly cold and we didn't go outside at night on the open road. The night was warm enough that we opened the moon roof. Wow. 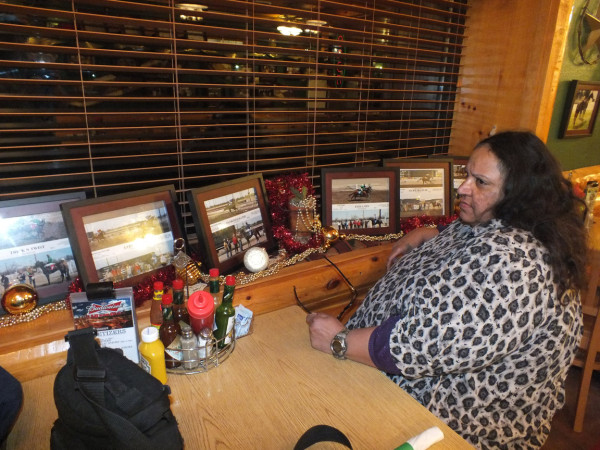 We hadn't eaten since Custer. We could have made it to the hotel and grazed on the various mixed nuts and other emergency food that seemed less necessary now, but in keeping with the winding down theme we picked an exit with "Food" signs. Avoiding any chain restaurant, we took our chances and kept going down the rural Wall, SD road until we came to the Red Rock Restaurant/The Rock Lounge & Casino. Another winner!

The walls were graced with photos of horses, apparently owned by the family who ran the restaurant. Carole was happy. She had the Prime Rib with baked potato. I went with the "local favorite" of country fried steak with potato oles. ("is it really a local favorite?" I asked the waitress. "Well, a lot of people order it." Good enough for me.) The prime rib was excellent; the country fried steak was nothing to write home about, but was solid fare. They, and the included salad bar (western states have a different version of soup/salad bar than around here), made a very full meal.

We talked a bit with the couple at the next table. He was a trucker from Montana who had driven to Florida to pick up his mother who was moving in with him. *whew* An even longer trip than ours! I ducked into the bar/casino next door. People who knew each other were conversing, one person playing pinball. Maybe not the most exciting Saturday night, but everyone was having a comfortable time hanging out at their familiar watering hole.
As an added bonus, the Vikings were playing. We missed the last two weeks of the regular season, including the surprise of the Vikings in the playoffs. Well, perhaps bonus is the wrong word, as the Vikes got trounced by the team they'd beaten last week. Oh well.

The Super 8 in Murdo, SD nicely fit our needs, and had the added psychological boost of being just to the east of the line separating Mountain Time and Central Time. Interestingly (at least to me), the timer on the GPS in the Camry connected to the sattelites, and updated when we crossed into the Central Time Zone. The clock in the car didn't. We set it manually. 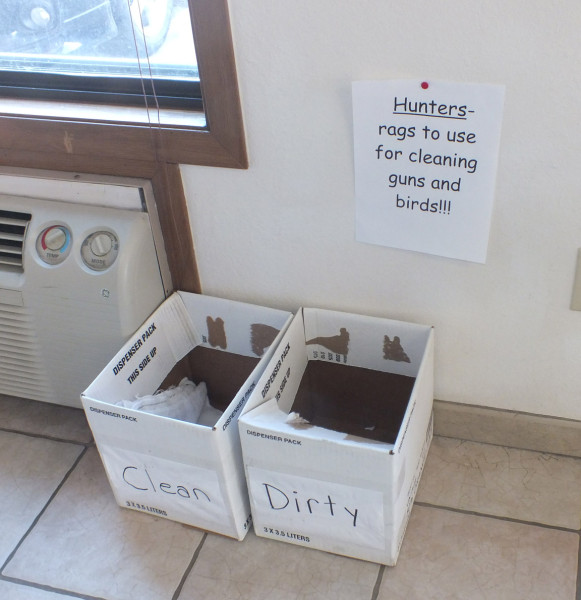 Super 8 Motel, Murdo, SD 1/6/13
didn't have amenities like an elevator to the second floor and one of the chairs was falling apart

The next morning, we were off again. An easy 430 mile jaunt back home. Clear weather, reset clocks, bags repacked. Ah, but it was nice enough for the State Troopers to be out as well. One warning later, we were off again, a bit slower... until we got to Minnesota.

I thought about asking the trooper to have his picture taken with us, but that seemed like tempting fate. 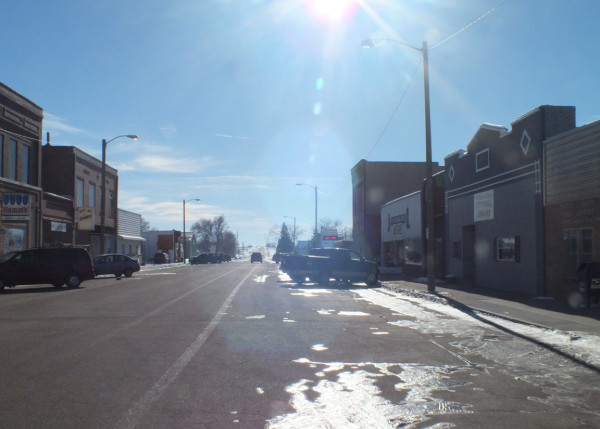 Empty street, White Lake, SD 1/6/13
not really a ghost town, but we didn't see anyone outside of the restaurant 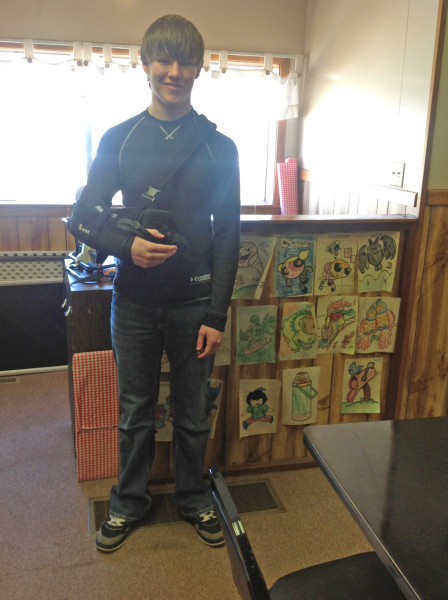 I bent my "keep at least a half-tank of gas" rule for our final push, but a hundred miles from the hotel we needed gas and could use a good breakfast. So around noon we pulled into White Lake, SD. Not much activity on a cold Sunday. We drove down the street to what may have been the only non-bar restaurant open, Claudia's Cafe. Just what we needed! Friendly service, decent breakfast (really brunch at this point). We were served by a nice kid with an arm damaged from playing HS sports. Carole had all sorts of advice for him. He nodded politely.

We found a gas station down the street. Well, some place with a gas pump with no attendent. The pump took my credit card. I filled up, didn't get a receipt, and we were off again. 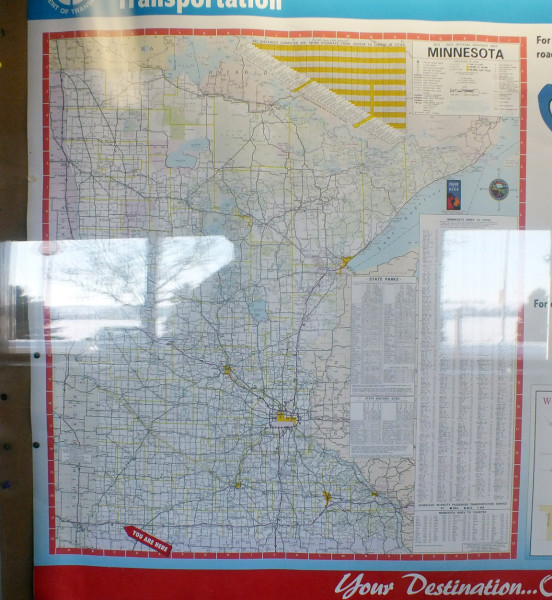 The rest of the trip was uneventful. We zipped through various highways in Southwestern Minnesota, with a pit stop along the way. At some point, I began to recognize the city names and the territory looked familiar.

We turned off the GPS and I came home by familiar roads.

We arrived after dark, tired but happy. The Cosmic Starship drove 4212.4 miles with grandeur and good mileage. We dragged some of the suitcases upstairs but left a lot of stuff. 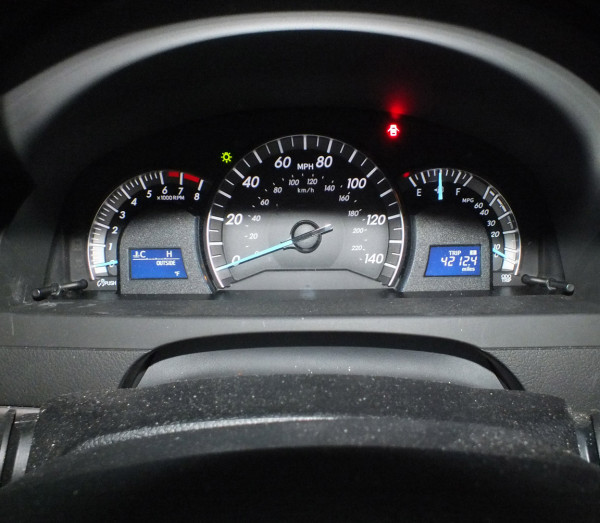 I eventually replaced the windshield, pitted from rocks thrown up by trucks in the mountains. A month later, the car still smells like sweat, coffee and mixed nuts. Ah, good times.

We're not quite recovered; Carole's knee is still not finished healing. I still have a cough. I've processed my photos, though not the few minutes of video, but Carole hasn't started on hers. Or the photos Legend took with her camera. Now that I'm done with these reports, I may look over her stuff.

Thanks for reading through all the trip reports! I hope you got a taste of the fun and excitement of the Epic Trip to Oregon and Back!