I'll be on the air tomorrow, Monday, at 7:10am on KFAI-FM, talking about the Fringe.

I spent most of the day working on Nicollet Repaving photos. I'm way behind. I'll probably blow off Sunday at the Fringe to stay home and catch up. Already today I edited two more interviews for the air, posted a Fringe video, and still need to work on road pics. But in the meantime: 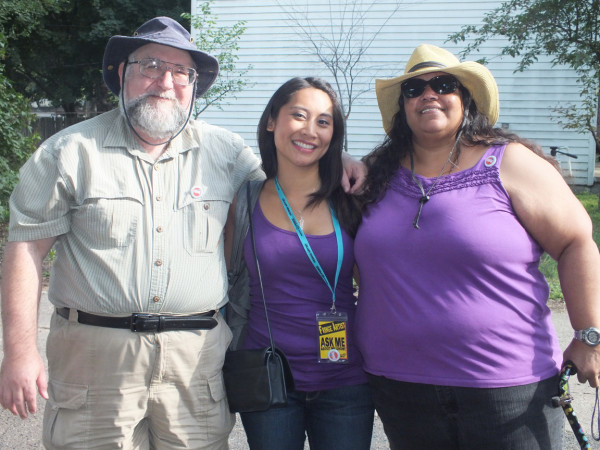 Dave, Nicole and Carole, after her performance at the Playwrights' Center 8/3/13

A true story with a little Tagalog

A fine, affecting, one-woman play about family. Her Philippines-born grandmother, who raised Nicole when her parents divorced, gets Alzheimer's. Not everyone reacts well. Nicole effortlessly portrays several family members as well as herself at various ages. Her autobiographical story mixes laughter and anguish, and rings true across cultures. Four and a half stars, rounded up for an engaging performance.

Added for LJ: The Fringe has lots of these kinds of autobiographies. Most, especially the ones from other cultures than my own, are worth seeing. Some stories are more interesting (to me) than others. Some are presented better. Nicole's Fringe show, edited down from a longer play, is excellent, slowly drawing you into her family. She's a superb actress. She's also a loquacious and engaging interviewee.

Continued from 2013 Fringe Festival Day 2: A quick Fringe with Werewolves